Armed with the very versatile and cost-effective Swiss Pass, my mission was to check out as much of Switzerland as possible in a week via rail, water, and bus.

“The idea of the Swiss Pass is to encourage people to get off the roads and onto trains and buses,” one of the locals had informed me – adding that it would also save the Alps from the evils of pollution. The Alps, surrounding the unquestionably beautiful city of Lucerne , looked pretty permanent to me, but I’m all for saving the planet. I took him at his word.

My pass provided me and my gear with easy entre from Zürich Airport by train and bus to my hosts in Lucerne in just over an hour. Here was a multiple transportation key to a quick, flexible, cost-effective way to avoid ticket booth lineups.

Lucerne, in the centre of Switzerland, is undeniably a charming, tourist-friendly city. In summer the entire city and suburbs traditionally dress in a riot of brilliant seasonal flowers. An easy city to see on foot, or by bus, you will shop (or window shop) ’til you drop. I warn you too, you will be unable to resist the enticing sidewalk bistros and their delicious chocolate treats.
Take time out to stroll, or join the joggers, along the broad promenade from the old world charm of the elegant century old Palace Luzern Hotel to the city centre around the lake head. The views are worth every step. You can even swim in the lake, too, if you so desire.

Mount Pilatus, reputed to be haunted at its summit by a friendly dragon, was only a bus ride away from my hotel. Swiss Pass holders are entitled to 50% off the cogwheel fare from Lucerne’s Alpnachstad up the mountain, or by cable car via the nearby suburb of Kriens.

Boarding the steepest cogwheel railway in the world, we wound our way up to an altitude of 2,132 meters (6,965 feet above sea level) for the 30-minute ride to Pilatus Kulm. If you prefer to hike up plan on just over five hours for the ascent, or just under four hours for the descent.

To avoid the steepest forested part of the hike take the railway to Amsigen (the middle station), and hike the rest of the way through the meadows. On the brilliant summer day of my visit, this seemed to be a popular alternative for many locals and tourists.

Lunch on the terrace at the top, or Kulm, as Queen Victoria did. Although she was transported to the top in a less comfortable fashion – via donkeys – she declared it was definitely worth the trip. Wander around the summit to marvel at over 70 alpine peaks, listen the alpenhorns, or test the local beer at the self-serve mountain tap.

If you have children with you, get off the cable car at the Seilpark Pilatus. The trails around this part of the mountain sport assorted stations offering a zip-line (try the Dragonita if you dare!), log and rope, and other challenging activates. Prices include instruction and equipment rental. It was a hive of activity the day I was there with children of all ages having the time of their lives. You can also try the Frakigaudi Rodelbahn, Switzerland’s longest summer toboggan run. Length? An exhilarating 4,429 feet.

We chose the cable car ride for our return to base, plus the short bus ride from Kreins to Lucerne.

The following day, I headed back to the Alpnachstad. It was time to test the water. Steamers ply Lake Lucerne twice a day between April and October with special sailings at Christmas and New Year. The colourful Wilhelm Tell Express was waiting to sail us from Lucerne to Gotthard.

It struck me as ironic that this leisurely, historic sailing tradition was to transport us to view rail history in the making. We were to view the construction site of what will be the world’s longest railway tunnel.

With Swiss clockwork precision the paddle wheeler trimmed effortlessly from one dock to another along the shores of Lake Lucerne. Photographers jockeyed for position on deck hoping to capture images of immaculate Swiss villages spilling down mountains and hills – often apparently linked directly to mountaintops by trams and cogwheel railways. Hikers and cyclists casually on and off-loaded at one picturesque village dock after another.

Even in sun-drenched June, it was easy to imagine a winterlude scene replacing bikers with skiers and snowboarders crunching through the snow. It was almost too good to be true. But – that’s Switzerland.

We completed our last few days in this area inspecting the Gotthard Tunnel Visitors site – a recommended stop for engineers and those fascinated by rail history. After 50 years of planning, engineering, and major construction, the Gotthard Base Tunnel is scheduled to go into operation in 2016. The AlpTransit Gotthard will be 57 kms long and is billed as the construction project of the century.

When the writing was on the wall, Cathy, facing the inevitable with optimism, shared four wishes with her mom.

One picture in particular made me pause.

Cathy is walking away from the camera next to a heart-shaped, flower-decked accent pool. Slim in a long skirt. A small backpack over her shoulders. Waist-length blonde hair lost to chemotherapy. A long-sleeved blouse guarding now delicate skin from the Hawaiian sun. The lone figure, digitally captured during her last days on the island of Maui, strikes me as haunting.

Two weeks earlier I had called her parents’ home near Aldergrove, B.C. She was home alone, and feeling philosophical.

We talked about the pending trip to Maui.
“I want to spend the time on Maui with Mom,” she said. “But, I also want to see Vegas one more time.”

We talked about books we’ d loved (or hated), movies we’d loved (or hated), and men we’d loved. We decided we didn’t hate any. But, we sure had learned a lot!
And what about those dating sites? What did we think of those? Not much, it seemed! We chuckled about it all…and much more.

Behind the laughter and the telephone were the tears in my eyes, and maybe in hers. We didn’t talk about that.

Independent eavesdroppers would have assumed we were just two gals passing the time of day – unless they heard Cathy say: “I’m not afraid to go.” 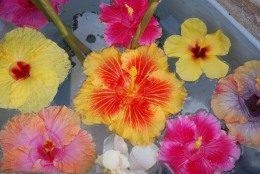 She then speculated about what was ‘on the other side’.

Nothing, she thought. She wasn’t anticipating a celestial welcoming committee.
Only the pain her parents and family would feel after she was gone distressed her. Against this, she was powerless.

Scanning the photographs, and reading her mom’s tale of Cathy’s Bucket List, I realised she’d actually arranged to stay with them.

She had just wandered a little out of sight – to the otherside of the pool.

Ask a successful businesswoman, mother, grandmother, or daughter, who influenced her most. Chances are she will name another strong, dedicated, courageous woman.

As the product of a long-line of strong-willed women I admire, I think of my Scottish grandmother. Mother of 11, business owner (a thriving Glasgow fish and chip shop, a “sweetie” shop high on a brae above the Saltcoats seaside, Holly House Temperance Hotel), dedicated wife and churchwoman.

If she feared the Great Depression (my grandfather was among the jobless Clydeside shipyard men of the day) she confessed it only to the Almighty.
While dispirited, unemployed labourers congregated on bleak, wind-swept street corners, she opened her hotel kitchen to serve Welsh Rarebit and tea to over 100 hungry children every Sunday.

No welfare. No government grants

To this day, no one knows how she did it.

“My Father has a great storehouse,” she’d reply cryptically when questioned.
After her death, at the age of 95, letters telling tales of those days arrived on Glasgow editorial desks from around the world…from those now-grown children. They had not forgotten.

Did I mention she also learned to type at the age of 85? Her columns were published in Glasgow dailies.

My mother earned my respect as a strict disciplinarian, a successful writer on three continents, a post-war Ontario pioneer, grandmother, and all-round survivor fortified with a dry sense of humour.

Armed with little more than hammer and saw (and a portable Underwood perched on an orange crate), she tamed virgin Clarkson (now Mississauga) farmland, built a house, and kept body and soul (hers and mine) together.

Optimistically we’d immigrated to Canada from Britain after the second World War.

Accommodation in Toronto was scarce. Purchasing an acre of land from farmer Richard Speck seemed a good move until father, a marine engineer, was obliged to return to the high seas.

Frustrated with job hunting in Toronto, he reached his limit when a well-heeled gent sporting a Havana and a thick European accent informed him during an interview: “You’re just the man for the job. It’s just too damn bad you’re British.” Imperial Oil felt differently. Our ancient mariner waved us goodbye and returned when the Ford plant was built in Oakville a couple of years later.

Lower Middle Road (now the 401, I think) beside which our tent, and eventually our home, was perched, was once referred to as the last Indian trail in Ontario. Mother was heard to remark that she suspected we were the last Indians.

When a Toronto Star Letter to the Editor appeared sneering that post-war Britishers ‘couldn’t take it’ and were high-tailing it back to Britain, mother instantly retaliated.
Her article announcing that this immigrant, and her 6-year-old daughter, sure could take it, earned her a double-page spread in the Star (with pictures), and a much appreciated cheque for $100.

That dealt with, she returned to hacking down thorn trees, hammering two-by-fours, warding off stray bootleggers at night, and submitting articles to The Party Line, a fledgling newspaper published by my friend Whitney Millard’s mom.

Five years later, mission accomplished, we immigrated to Africa – and she did it all over again.

Reflecting on International Women’s Day it occurs to me to hope that my daughters (and my son) will be inspired by such matriarchal tales, and that, in turn, the next generation will also be encouraged.

Perhaps these reflections will prompt you to craft stories about equally influential women in your life.

I sincerely hope so.

The tales are worth the telling.

“I don’t want to get to the end of my life and find that I lived just the length of it. I want to have lived the width of it as well.” Diane Ackerman, poet – Newsweek, September 22, 1986